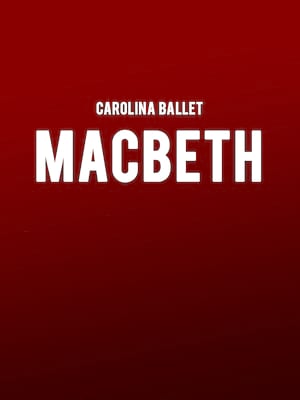 Something Wicked This Way Comes

Carolina Ballet's artistic director Robert Weiss's famed take on one of the Bard's greatest works returns this season, following its stunning 2016 premiere. A protege of George Balanchine, Weiss has a host of acclaimed balletic adaptations to his name, but his Macbeth has proven to be one of his most powerful and evocative!

Macbeth is famed for being Shakespeare's darkest and most potent plays. Scottish general Macbeth receives a prophecy from a trio of witches, predicting that he will one day become king of Scotland. His obsession with the idea leads him to kill King Duncan and claim the throne for himself, a crime which sees him overtaken with guilt and paranoia. Composer J. Mark Scearce's innovative score and Weiss's choreography intwine deliciously to create this fantastic imagining of the famed tale of lust, greed, and murderous ambition.

Created by Robert Weiss, based on the original play by William Shakespeare
Score by J. Mark Scearce

Sound good to you? Share this page on social media and let your friends know about Carolina Ballet: Macbeth at Raleigh Memorial Auditorium.