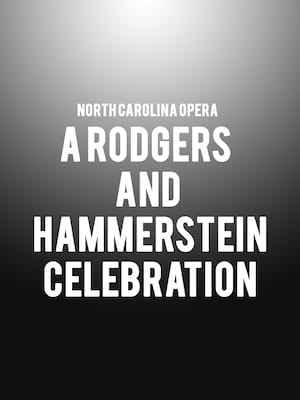 Why See North Carolina Opera - A Rodgers And Hammerstein Celebration?

Celebrate The Legacy of Rodgers & Hammerstein

Oscar Andy Hammerstein III, the grandson of the legendary lyricist Oscar Hammerstein II, joins the North Carolina Opera to perform in three special concerts celebrating the vast sonic legacy of the immortal Rodgers and Hammerstein musical theatre partnership. An exuberant celebration of the duo's most recognizable and beloved classics, the program features memorable songs selected from smash-hit musicals The Sound of Music, The King and I, and South Pacific amongst others.

Highly innovative and influential, Richard Rogers and Oscar Hammerstein III's musical partnership flourished during the 40s and 50s, spawning many successful musicals of the 'golden age' as well as many musical theatre standards that make up their wonderful back-catalog. Their joint awards haul remains one of the biggest to date, having garnered no less than 34 Tony Awards, 14 Academy Awards, a Pulitzer Prize, and two Grammy Awards.

Sound good to you? Share this page on social media and let your friends know about North Carolina Opera - A Rodgers And Hammerstein Celebration at Raleigh Memorial Auditorium.