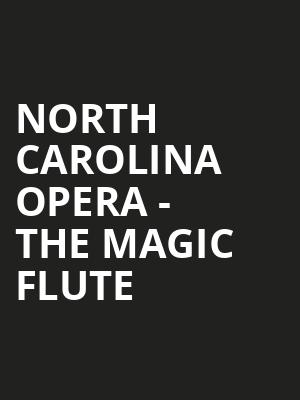 Experience the magic of Mozart's Singspiel masterpiece during the North Carolina Opera's soaring production of The Magic Flute. One of the iconic composer's last and most beloved works, it fuses spoken dialogues with exquisite arias and ensemble pieces, spectacular visual effects and a story-line that encompasses myth, magic and the search for enlightenment - a true crowd-pleaser of an opera.

The opera sets off to a rousing pace, opening in the midst of exciting action. A young prince named Tamino is chased by a serpent and to his good luck, three mysterious women save him and kill the monstrous snake. The trio show Tamino a picture of the beautiful Princess Pamina, daughter of the Queen of the Night, whose been kidnapped by the evil high priest Sarastro. Falling immediately in love, Tamino sets out on a quest to save her and comes face to face with his greatest trials yet.

Sound good to you? Share this page on social media and let your friends know about North Carolina Opera - The Magic Flute at Raleigh Memorial Auditorium.