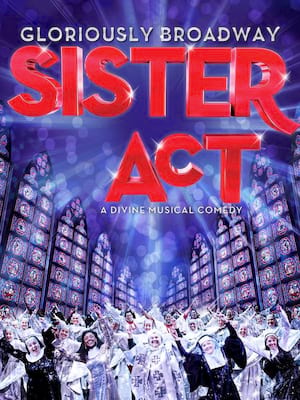 ALL HAIL THIS HOLY SMASH HIT!

Having originated across the Atlantic in London, Sister Act has been Broadway's feel-amazing musical comedy smash. Produced by Whoopi Goldberg, the star of the original hit movie, it features original music by 8-time Oscar winning composer ALAN MENKEN (Beauty and the Beast, The Little Mermaid, Little Shop of Horrors).

WHAT IS SISTER ACT ABOUT?

Sister Act tells the story of Deloris Van Cartier, a wannabe diva in a seedy Philly casino, whose life takes a surprising turn when she witnesses a violent crime committed by her mobster boyfriend Jackson, and the cops hide her in the last place anyone would think to look - a convent! In a truly hilarious fish-out-of-water story, Deloris becomes Sister Mary Clarence, and manages to spark the ire of her dour Mother Superior with her brash ways and refusal to abide by the rules. However, "Sister Mary" gains the respect of her fellow postulants when she takes over their dismal choir and reorganizes it, allowing them to find their true voices - and where she unexpectedly rediscovers her own.

However, as the choir starts attracting press attention, and money starts pouring in by the public to renovate the old convent, it isn't long before Jackson discovers the ruse, and he intends to flush Deloris out! The race is on for the nuns to band together and protect their new arrival - at whatever cost! A sparkling tribute to the universal power of friendship, Sister Act is a reason to REJOICE.

Whoopi Goldberg, the star of the original movie wasn't content to sit on the sidelines in London as the show's producer; for a limited number of performances towards the end of the run, she donned the habit and robes of the formidable Mother Superior and delighted the crowds with her stern performance!

May be inappropriate for 8 and under.

2 hours and 30 minutes, including one 15 minute intermission

The performance was enjoyed very much. It was amazing to see the professionalism... more

The show was awesome! A lot of fun to be there for opening night. Worth... more

Sound good to you? Share this page on social media and let your friends know about Sister Act at Raleigh Memorial Auditorium.