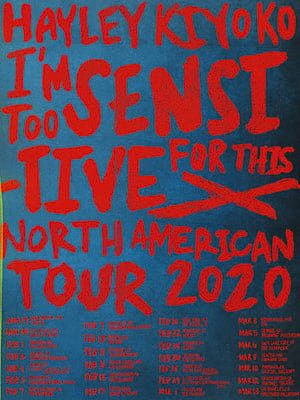 I'm too sensitive for this sh*t tour

Hayley Kiyoko is hitting the road in 2020 in celebration of her brand new EP, "I'm Too Sensitive For This "Sh*t". Having released the title track "Demons" in October Kiyoko is bringing her intoxicating synth-pop sound to 25 cities across North America in this extensive tour. "Demons" sees Kiyoko battle with the demons in her head and alludes to the theme of Kiyoko's second release.

Hayley has wanted to inspire confidence in young people dealing with the same struggles that she went through when coming out. She stated Katy Perry's hit "I Kissed A Girl" was what helped her begin this incredible journey. Hayley's music is known for celebrating desire whilst acknowledging the loneliness that can accompany it along the way.

Most recently, Hayley was selected as one of the British LGBT awards 'Top 10 Music Artists 2018' nominees alongside; Frank Ocean, Dua Lipa, P!NK and many more.

Though Hayley Kiyoko may be best known for playing Velma Dinkley in the Scooby-Doo films; The Mystery Begins and Curse Of The Lake Monster - we're positively sure she will now be known for making such a huge impact on others lives with her inspiring tracks.

Sound good to you? Share this page on social media and let your friends know about Hayley Kiyoko at The Ritz.