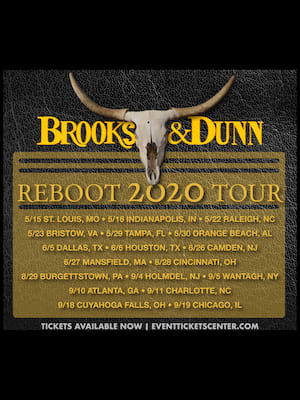 ... they have consistently offered some of the most fiery and delightfully rowdy country music from the last decade or so.

Why See Brooks and Dunn?

Hold onto your stetsons ladies and gentlemen, because the biggest-selling duo in Country music history is dusting off its hits and heading out on tour for the first time in a decade! Comprised of soulful singer Ronnie Dunn and free-wheeling showman Kix Brooks, Brooks and Dunn ruled the country roost in the 90s, kicking off the era's line-dancing craze with upbeat honky-tonk anthems, and danceable beats.

Selling more records than even Simon & Garfunkel at the time, the outfit formed in 1990 and had an immediate breakthrough success with the release of their debut album Brand New Man in 1991 and singles Neon Moon, My Next Broken Heart, and Boot Scootin' Boogie. Platinum-certified accolades followed, to date the pair have hit No. 1 twenty times, released 11 studio albums and received two Grammys for their efforts. The Reboot 2020 Tour supports the 2019 release of their critically acclaimed duets album Reboot.

Seen Brooks and Dunn? Loved it? Hated it?

Sound good to you? Share this page on social media and let your friends know about Brooks and Dunn at Coastal Credit Union Music Park.