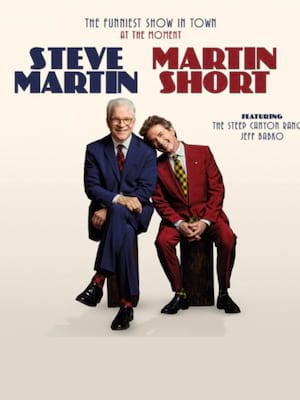 Martin meets Martin in this extraordinary meeting of two of modern comedy's greatest entertainers. Steve Martin and Martin Short present 'The Greatest Show In Town At The Moment', a Q&A style conversation between the two comedians and the audience with a musical twist. Expect an evening of banjo-tinged interludes and singing punctuated by the side-splitting humor and charisma of these comedy greats.

Grammy Award-winning comedian and accomplished bluegrass pianist Steve Martin has had a stellar, almost 50-year long career in film, stand-up and television, winning the hearts of international audiences with turns in gems like 'Father of the Bride' (alongside Martin Short) and 'Bowfinger'. Since his break-out comedy debut on SNL, actor and comedian Short quickly crossed over to mainstream films and theatre, winning a Tony Award for his role in the 1999 revival of 'Little Me'.

we laughed until our cheeks hurt. what an incredible show!!! we would recommend... more

Kathie Vagi: “An Evening You Will Forget For The Rest Of Your Life”

I will never forget this evening. An incredibly entertaining show! So... more

Sound good to you? Share this page on social media and let your friends know about Steve Martin & Martin Short at Red Hat Amphitheater.